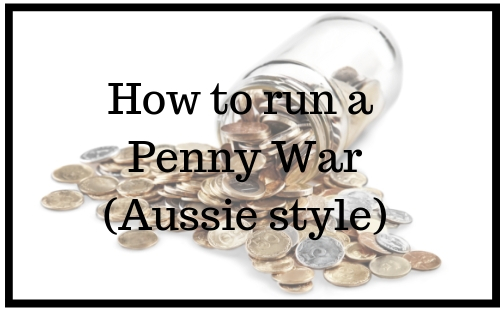 A Penny War (for want of a better name) is a surprisingly competitive and tactical fundraiser that you can run over one or two weeks at school.

This is no simple ‘bring as many five cent pieces as you can’ fundraiser – a true Penny War has rules and strategies that make it far more interesting, and ultimately, financially successful.

The basic (American) rules are as follows:

Each class gets a large jug or container for collecting coins.

Pennies and bills are worth positive points (1 penny = 1 point, 1 dollar = 100 points etc) but the silver coins (nickels, dimes and quarters) are worth negative points.

The goal is for each class to make as many points as they can, so students are encouraged to place pennies and notes in their own containers, while also adding silver coins to other classes (which will reduce their points). 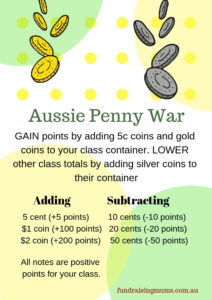 How will this work in Australia?

Since we no longer have 1 and 2 cent coins in circulation, the rules would be as follows:

Therefore, if you encourage students and staff to bring in some loose change, they would place all their five cent pieces and gold coins in their own containers, and drop the other silver coins in another classroom’s container, thus reducing the number of points the other class can earn.

Run over a week, with all the containers in a highly visible (and safe) location such as the front office or canteen area, you will see kids beginning to strategise where they will put coins, and how they respond to others’ ‘donations’.

The beauty of this fundraiser, is that while certain coins might count as a negative to one classroom, money is money, and all donations will be helpful for fundraising.

What do you need to run a Penny War?

One large, see through container per class. Large water jugs (found commonly at workplaces) are a great option because it’s easy to put the money in but difficult to get it out again, and you can easily see the coins build up. Alternatives are large plastic/tuppaware containers (the type you’d use for spaghetti), or huge glass jars. Make sure they are well labelled with the class names so there is no confusion.

Decide on a timeframe to run your war. One week to two weeks is ideal, any longer and people lose interest (or run out of change). Keep in mind that the more money you have in each container, the heavier it will be.

A set of rules. It is best to keep them as simple as possible. Create a flyer to go home with each family in the week prior to your war so that parents can start digging through the car console and between the couch cushions to find loose coins. You can download a generic Aussie Penny War PDF here. Fundraising Mums Aussie Penny War Rules download

Make sure you run it more than once. Once your staff and students understand the strategies of a Penny War, you will find that certain savvy students save their big silver coin ‘donations’ to the last minute. By topping up a rival’s jar with a handful of 50 cent pieces just before the official end of the War, they can drop another class out of contention, and it’s safe to say, revenge will profitable for the school. 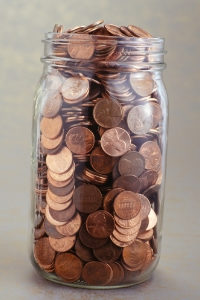 A team of volunteers to help count the money. The more successful your fundraiser, the more work for your team of counters. You will need a large, secure space for them to work and if you have access to coin counters this would save a lot of time. An alternative is to bring in sensitive kitchen scales – it’s easy to determine how much $10 worth of five cent coins weighs and to use this as your basis for counting.

If you have a friendly local bank, they might help with the counting, but you need to remember you don’t want an overall total, you need to calculate the value of the five cent/gold coins and the silver coins separately so you can determine the number of points for each class.

The winner is the class with the most points (even if all the scores are actually negative) and the prize can be anything from a class party to extra time at recess or lunch.  Check out some other great class prizes and incentives here.

Will your school be running a Penny War this year?