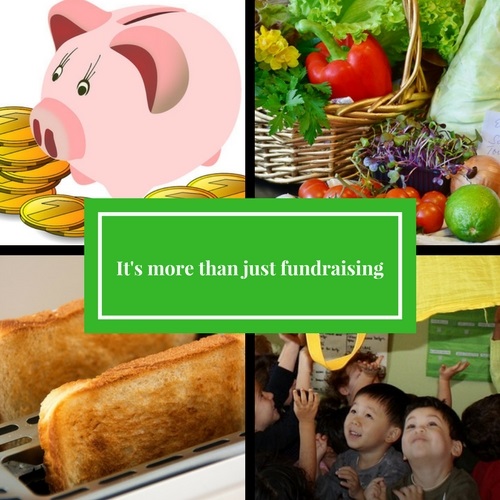 Fundraising is not the only thing your P&C does in the school. Not all committees perform all of these roles, but here are just some of the awesome things your P&C might do at your school.

According to the Australian Bureau of Statistics there are just over 9,400 schools in Australia, and while not all of them would have a canteen, of those that do, many are run by the P&C committee. Some schools may employ a canteen manager and staff but in large part, many school canteens are dependent on volunteers to make and sell food. It’s a tough job, with lots of regulations and insurance and policies to follow, not to mention keeping on top of the traffic light system of red/amber/green foods. Anyone who works in hospitality also knows that the profit margin on food is negligible. Still there are plenty of benefits of having a canteen on the grounds of your school such a helping kids to learn about money, a useful life skill they probably won’t learn in class.

Schools that run their own uniforms shop not only do it for the tiny profit they make on selling hats and shirts and dresses, but because it is convenient for families, who appreciate being able to try on clothes before committing to buy. The other benefits of having an internal uniform shop is that it keeps costs down, encourages students to all wear the correct uniform and there are plenty of families who may benefit from being able to buy second hand items.

Out of School Hours Care

While it is the Education Departments who are responsible for licencing out of school hours (OSHC) providers, in most schools the decision whether or not to offer before and after school care lies with the Principal who makes the decision based on a lot of factors including space requirements, defined need, and the availability of suitable providers. As a result, there is a range of services across the country of OSHC being provided by local councils, private firms, not-for-profit community groups and volunteers from P&Cs. For those schools who do have a P&C run service, remember they are taking on a big job with lots of regulations and rules. They can also bring in lots of money for the school which is great for the bottom-line or they can run it as a not-for-profit which is great for families.

Kids who arrive at school hungry often can’t concentrate which inevitably affects their learning and attendance. As such, many states have a breakfast club program, overseen by the government and targeting schools considered to be at disadvantage. Every day, food is provided, often by places like Foodbank, to make sure all kids get a healthy breakfast. Across the country there are hundreds of schools and thousands of students benefitting from breakfast clubs, and while the food may be donated, someone needs to prepare and serve it – and you guessed it – it’s often volunteers from the P&C.

P&Cs are usually responsible for finding and overseeing class (or parent) reps, volunteers from each classroom who act a liaison between the school, the P&C and parent group. The parent reps are an important channel of communication as well as contributing to the social and community aspects of school life. For more information on how to be a class rep, click here.

School Banking is run through at least one of the major banks as well as smaller banks at schools across the country and has actually been around since the late 1800s. School banking is essentially about teaching kids about the fundamentals of saving and other financial skills. While not all schools run the program, they can be utilised as a fundraising opportunity (with payments often paid for each school banking account that is opened as well as small commissions on each deposit), meaning it is usually parent volunteers who run the banking service each week.

Other things we have to thank our P&Cs for are for helping out in the library such as assisting with stocktake and covering books. Additionally, even though it is usually teachers and educators who can be officially trained in the school kitchen garden program, they are often planted and maintained by a team of P&C and other volunteers, meaning that the gardens are in top condition when it is time for teachers to bring students out to the garden classroom for learning.

There are undoubtedly other things that the P&C do at your school that haven’t been covered – why not write in to fundraisingmumsblog@gmail.com and sing their praises. We have a lot to thank the office holders and volunteers for – they do so much more for the schools than just fundraising.

How to be a Parent Rep

Fundraising with School Banking – The Facts