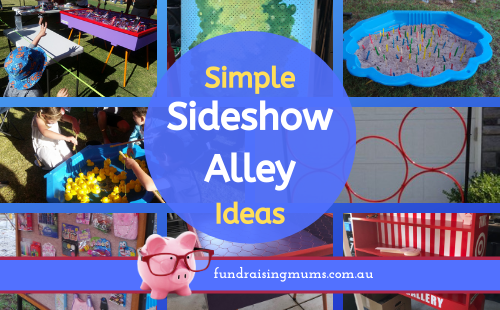 While parents might like nothing better than trawling through second-hand books and looking at handmade crafts, at a school fete kids just want to win stuff. Setting up a Side Show Alley is an easy way to amuse kids, and with these simple ideas, you can raise extra money without a lot of work.

Prizes do not need to be elaborate, big or expensive, and you should try and make them different for each stall. This will encourage kids to want to try all the games to win all the different types of prizes.

With stalls where ‘everybody wins’ suitable prizes include lollypops, Freddo frogs, mini packets of Smarties and any wrapped lollies. Non-edible prizes could be mini erasers, glow sticks, bouncy balls and any of the small toys you might normally find in a take-home bag at a party (check out the party section in the $2 stores).

Larger prizes can be sourced from donations to the white elephant stall – look for new toys and unwrapped craft items. Even good quality used toys and books can make a suitable prize, alternatively the prize can be a voucher which the kids can redeem at the toy stall. 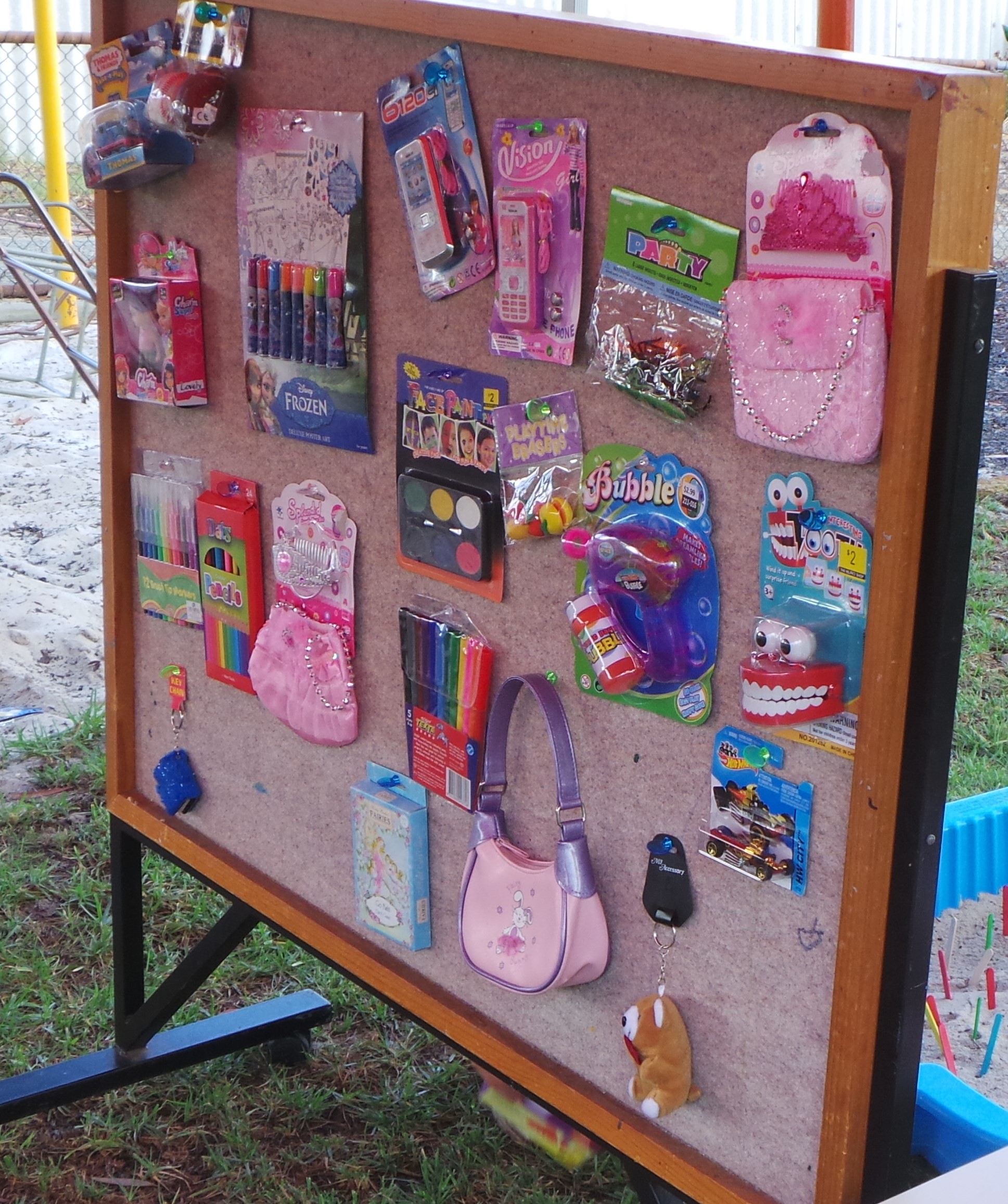 Display your prizes on a pin-up board

Parents might not agree, but kids often love walking around the fete with a giant stuffed animal under their arm that they have won on a game. Source clean, lightly used stuffed animals from the second hand toy stall to use as prizes.

If your canteen is on board, they might donate vouchers for icecreams, drinks or morning tea snacks that the kids can redeem at school the following week.

You could also operate a ticket system like TimeZone, where kids win a ticket for playing a game, and they can redeem tickets for prizes at a central stall. If this sounds like too much work, children can win raffle tickets for a fantastic prize at the end of the day –the more games they play, the more chances they will have to win the major prize.

Utilise ‘free dress days’ to get the entire school bringing in donations for your sideshow prizes – learn how here.

Try and keep Side Show Alley games together – consider a large marquee or tent, or even just rope the area off.

Children (8+) are usually quite capable of manning these types of stalls (with adult supervision) and to make it easier, you can have a centralised ticket booth (run by an adult) where people can buy tickets (ie. 50c to $2 each) which can be redeemed at any of the games.

If you have big prizes such as stuffed animals or a grand prize (a donated bike or boogie board) make sure they are well displayed where they will attract attention.

Have a loud bell to ring when someone wins a major prize. It will create excitement and attract attention. 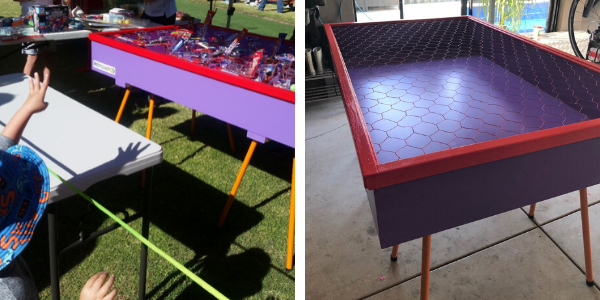 This chocolate toss game was made for the Jolimont Fete. A similar DIY version could be constructed using a small bookshelf with the shelves removed, legs added and a frame with mesh or chicken wire attached to the front. Don’t forget to hinge the frame so you can lift it up to collect your money.

Pop-stick game: stick 100 pop-sticks in a wheelbarrow or paddling pool full of sand. Mark some of them with a star to indicate a major prize has been won.

The human fruit machine: three volunteers each have a covered bucket with identical fruit. When the bell is rung they each pull out a piece of fruit – if they are all the same, the person wins. 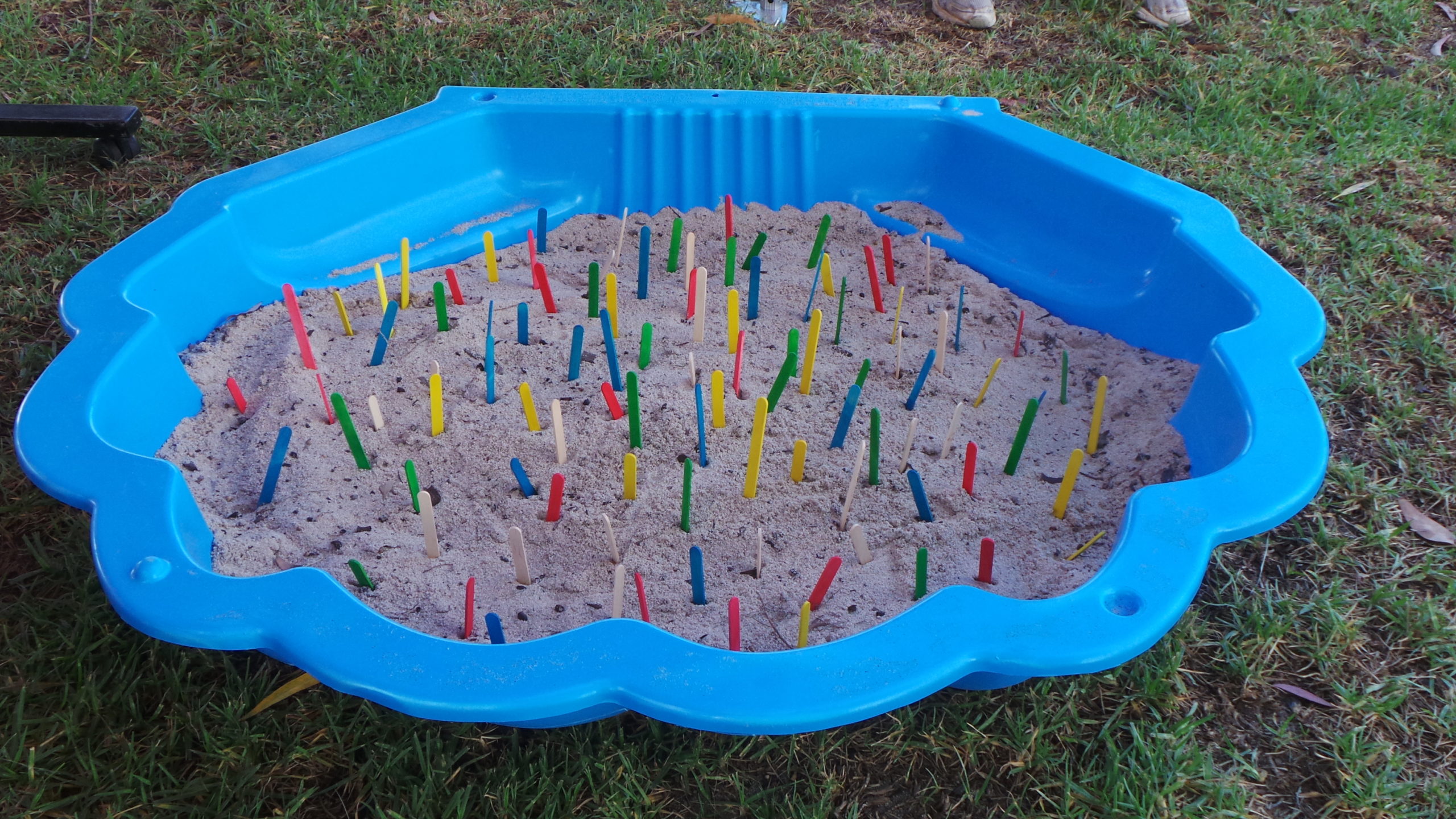 Fishing game/Duck game: fill a paddling pool with water and rubber duckies or fish. Each duck/fish has a number on the bottom which corresponds to a prize.

Lollypop tree: stick lollypops into a polystyrene board (or particle board with drilled holes). Most people will just win the lollypop but some will have a special mark on the stick which means they have won a special prize.

Lucky cup: place prizes in polystyrene cups filled with (clean) sand. Tip onto sieve to find prize (the sand falls into a large bucket). Some cups might have no prize, most might have a wrapped lolly or Freddo, but some can contain larger prizes such as $5 note or $2 coin.

Tombola: choose a raffle ticket at random which corresponds to a jar filled with a prize. Get 75+ great Tombola ideas here. 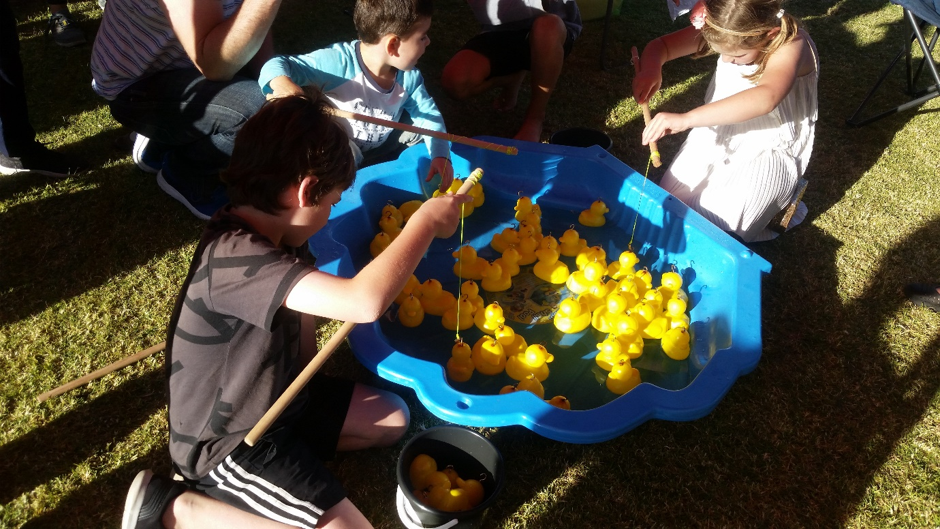 A children’s paddling pool is all you need for the duck/fishing game. Source cheap rubber ducks online and add a cup hook to the back of each. Write a number underneath in permanent ink which corresponds to a prize. The fishing rods are simply lengths of dowel with string and a loop in the end.

Water pistols: use water pistols (or nerf guns) to knock over empty soft drink bottles. Provide buckets of water for kids to refill their pistol.

Ten pin bowling: fill plastic bottles with different coloured water (just because it looks nice) and use balls to knock them down. You will need to experiment with the type of ball, amount of water and the distance kids have to roll the ball.

Bean bag/Football throw 1: kids must throw beans bags into hula hoops at various distances (easy) or the rungs of ladder which is lying down (harder). Set a time limit for the players to get a bean bag into each space. 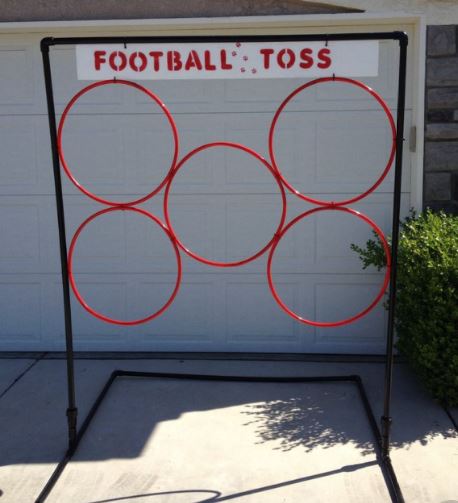 Bean bag throw 2: place large garden pebbles randomly on the grown. Some pebbles have a star marked on the back to indicate a ‘major’ prize has been won. The bean bag must cover the entire pebble to ‘win’.

Plate balance: fill a paddling pool with water and float a small plastic plate on top. Kids must throw a 10c coin and if it lands on the plate they win a prize.

Ping Pong pots: throw ping pong balls into empty ceramic flower pots. This is a lot harder than it sounds as they tend to bounce out. A good one for older kids and adults.

Chocolate throw: make a coin land on top of a block of chocolate to win it. 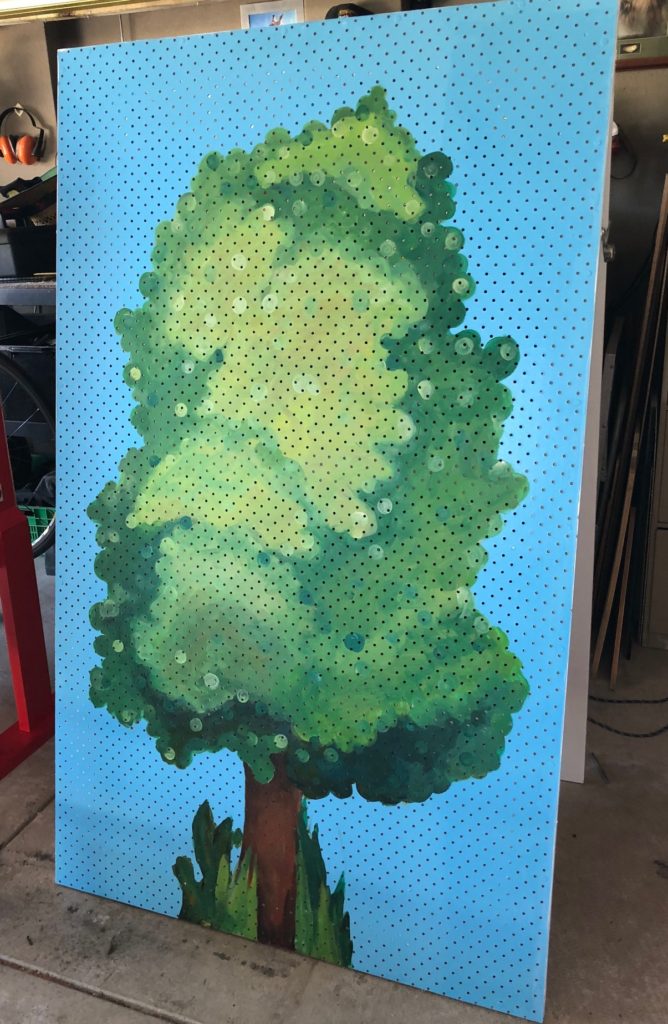 What are your favourite side show alley games? Share your ideas here.

QUICK IDEA – how to get donations for your next fete