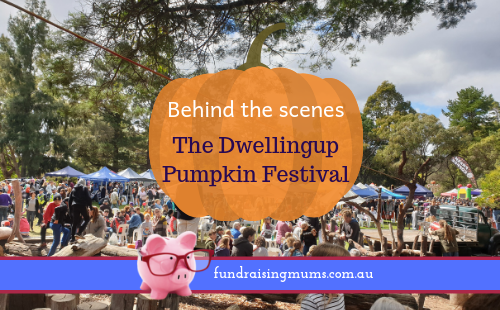 The Dwellingup Pumpkin Festival is a hugely popular and successful family event that takes place every Easter in the tiny town of Dwellingup, about ninety minutes south of Perth. Over two decades it’s become an iconic event that attracts up to 15,000 visitors, boasting 100 market stalls, food vans, rides and entertainment, and a unique theme that captures the imagination of everyone who attends.

For Fundraising Mums readers, it’s also a fascinating case study in how small and regional groups can pull off huge events, and how you can ‘level up’ your school fundraisers without losing the special character of the event.

It started with an argument

The original Pumpkin Festival started 23 years ago when two local farmers had a debate over who could grow the largest pumpkin. They agreed to meet on a certain date and weigh their biggest pumpkin to see who the winner was. As tends to happen in Australia, someone put some sausages on a BBQ and the event became local lore. Over the next two decades it just grew from there, becoming the primary fundraiser for the Dwellingup Primary P&C and a favourite event on the West Australian calendar. 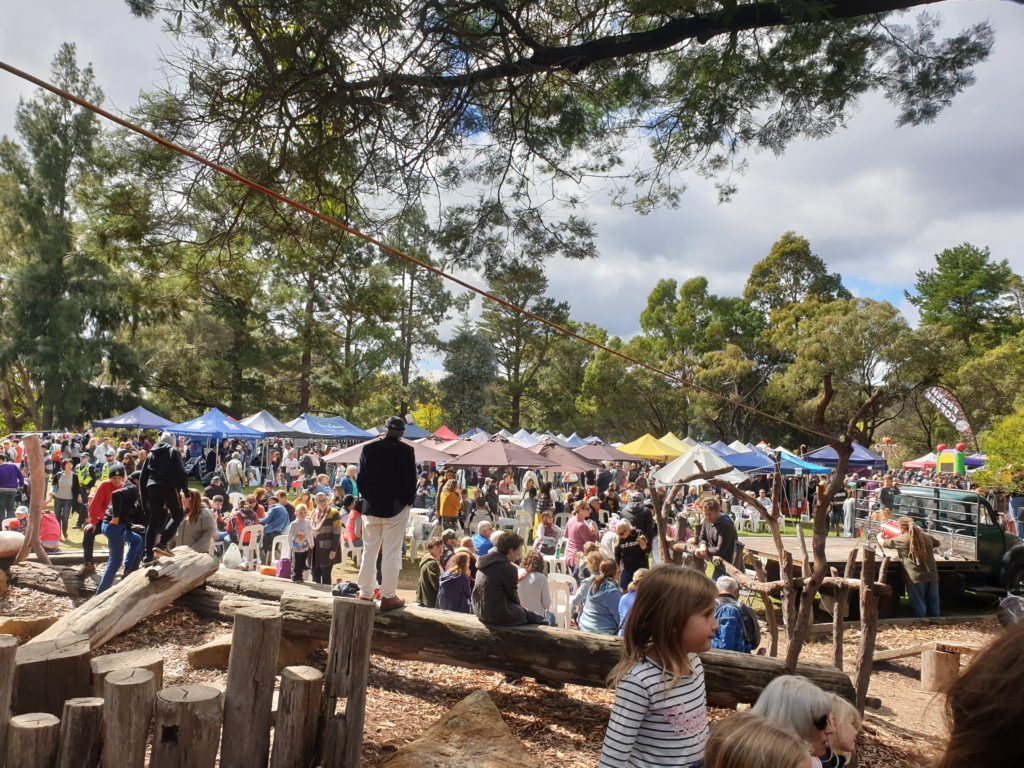 Dwellingup is set in the beautiful jarrah and marri forests of south-west Australia. With only 500 residents, the town itself is smaller than 95% of high schools in Western Australia. The local primary school has only 55 pupils, from 35 families and an active P&C committee of seven people (which in itself is an impressive statistic as it represents 20% of the school community).

While the Dwellingup Pumpkin Festival is effectively organised by just three people in the six months in the lead up to the event, much of the township is involved in the day. Parents and staff from the school coordinate the bake stall, white elephant stall, jar stall and canteen as well as helping with the set-up and pack down. The teaching staff, Principal and their families all volunteer on the day, as do around 30 locals who help with selling raffle tickets and manning the Festival entry points.

Over 100 businesses from across the south-west support the event with prizes and vouchers, something that Festival co-ordinator Warren Haugh, finds very humbling. Every little bit helps: such as Newmont, one of the major employers in the region, stopping their massive road trains travelling between the Boddington mine site and the Bunbury Port for the day of the Festival, to help reduce congestion on the roads around the event.

In its early days, the Festival was relatively small, with 15 market stalls, half a dozen P&C stalls, a face painter, bouncy castle and petting zoo. Attendance was an impressive 1,500 people – mostly because of the astute decision to hold the event on Easter Saturday, when the nearby Nanga camp grounds and other local sites were full of holiday-goers for the Easter long weekend.

By the time Warren took over as organiser in 2016, it had been identified that there was room for the festival to grow. Growing the event required an investment of funds, both from corporate sponsorship and a commitment from the P&C, but in the first year the Festival introduced four food vans and a live band. Attendance increased to 5,000.

The following year, the Festival grew again and an incredible 10,000 visitors streamed through the gates. Unsure if this was the new norm, next year the organisers again notched up involvement; organising street closures, seven food vans, live music on two stages and a massive 100 market stalls. Again, more than 10,000 visitors visited the tiny town.

In 2019, more than 14,000 visitors attended the Dwellingup Pumpkin Festival.

As you would expect with numbers like that, the Dwellingup Pumpkin Festival is now much bigger than just the school, and one of the aims of the Festival is to attract visitors to the region, and showcase its many assets, such as the Hotham Valley Railway and Forrest Heritage Centre. Businesses across town enjoy record trade on the day. It has become a careful balancing act between raising funds for the school, helping out other local charities and groups, boosting tourism for the town and providing an affordable family friendly event for locals and visitors. 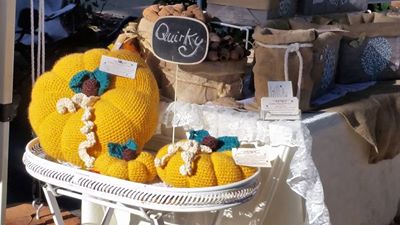 The importance of a theme

Throughout the 23 year history, one thing has remained a constant – the Pumpkin competition. This legacy is what makes the event truly unique and sets it apart from all other school fetes. As the Festival has grown, so has the Pumpkin Growing competition, with prizes for the various categories now worth over $4,000. The festival record stands at 361kg, a record-smashing pumpkin grown by Robert Giumelli in 2018, while other categories include smallest and oddest shape.

In keeping with the inclusive nature of the Festival, the pumpkin growing competition in recent years has been extended to other schools. Packets of seeds and invitations to be involved were sent to 50 schools far and wide, resulting in a number of schools entering a pumpkin in the festival in 2019.

Giant pumpkins are dotted throughout the Festival, and ‘pumpkin selfies’ are becoming an essential part of the day. Naturally, the P&C stalls sell pumpkin soup and pumpkin scones, and local artisans work pumpkins into their crafts. By not losing sight of the importance of this theme, the Pumpkin Festival retains its popularity year in, year out. Considering one of the pumpkin growers from the very first competition still works at the school as the gardener, the organising committee works hard to ensure that the Festival retains the original ethos, which is to provide an affordable and fun day out for the family, and not become overly commercial.

Having a theme also allows organisers to up the ante, such as the canny World Guinness Record attempt in 2017 to smash the most pumpkins in a minute with a hammer. The previous record was 15 pumpkins, which was literally smashed in the Dwellingup attempt which saw local man Alex Ashcroft smash 72 pumpkins in a minute. 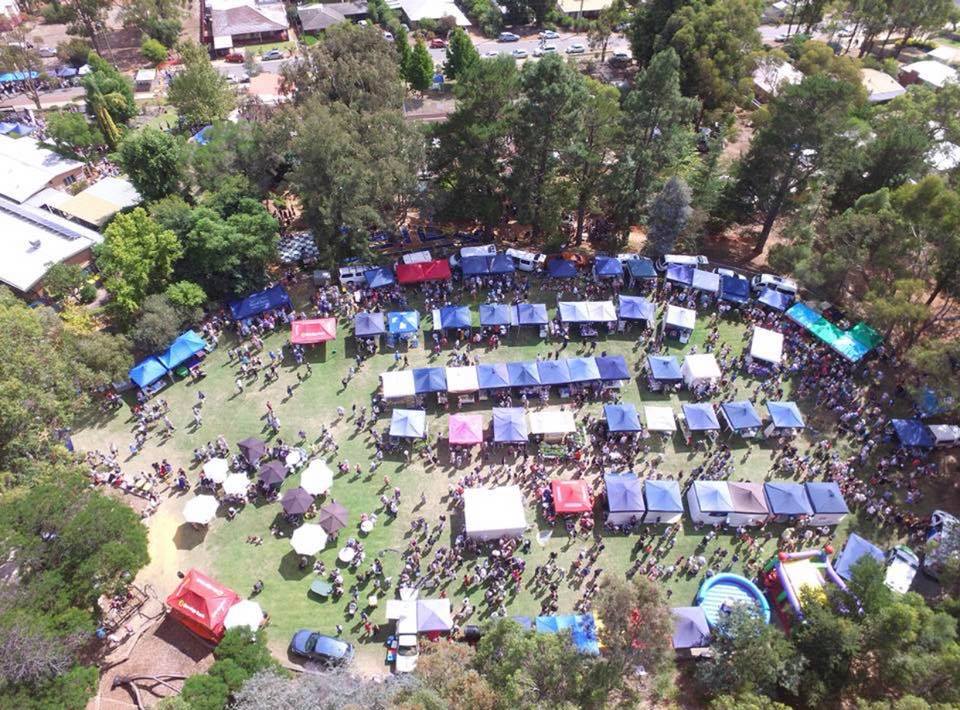 As the Festival grows, so do the costs, but many of these come from the almost invisible services that make an event more pleasurable and convenient for the thousands of visitors. Paying to triple the number of portaloos, hiring 30 rubbish bins, and engaging cleaners to keep the toilets clean throughout the event are all examples of the costs of upscaling an event that don’t bring any direct financial recompense. But it was a decision the organisers decided to make, knowing that these are the types of services people might not mention when they are there, but definitely notice when they’re not.

It meant that costs for the event in 2019 came to nearly $40,000, a huge outlay for any sized school, let alone a small one like Dwellingup. As such, one of the main tasks of the organising committee has been to find corporate sponsors to help offset these considerable costs. Four major sponsors have been with Warren during his time as organiser; The Shire of Murray, Pinjarra Community Bendigo Bank, Newmont and Alcoa and recent recruits MZI Resources and Southern Ports are all examples of businesses helping their local communities by sponsoring events such as the Pumpkin Festival.

However, as Warren points out, corporate sponsorship pays for more much more than hygiene facilities. It also offsets the costs of hiring entertainment so that the Festival is able to offer children’s rides and activities such as pony rides, reptile show, petting zoo, bouncy castle, mini golf and face painters for the cost of a gold coin donation. Multiple activities – such as a big top circus performance and circus workshops – were provided for free, as well as live music, roving entertainers and stilt walkers.

An obvious solution to the growing costs of running such an event would be to increase the price of children’s entertainment, but this doesn’t meet the school’s philosophy to keep the event as an affordable and accessible day out for the entire family. As a result, corporate sponsorship is vital to the ongoing success of the Festival.

Dwellingup Primary appreciates how lucky it is to have an event such as the Pumpkin Festival as its major fundraiser. Every year it raises around $20,000 for the P&C. Given the number of festival-goers, this profit could be more, but the school pays it forward by allowing other charities and not-for-profits to have free stalls at the event, or run raffles and other fundraising. In 2019 there were 8 free stalls up for offer, with places taken by a cancer support group, animal welfare, sporting groups and others.

Fees are kept low for the 100+ market stalls ($50) and visiting food vans ($120), and there is loyalty within the Pumpkin Family – with guaranteed spots for returning vendors. This in turn ensures that vendors – who comes from across the state – contribute to the event’s success by spreading the word to their own customers base.

On the day of the Festival, the Pinjarra Lions Club operate the parking on the town oval for a gold coin donation, which they keep. In return, their volunteers operate a sausage sizzle at the Festival and return those profits to the P&C.

In 2019, the Festival made the decision to reach out to two local not-for-profit organisations, appealing to their members to volunteer for the day at the event. In return, the P&C was able to make a $1,000 donation to each of the groups.

I would like to thank Dwellingup Pumpkin Festival organiser Warren Haugh for sharing the Festival’s incredible story with Fundraising Mums. It’s an inspiration to schools and groups of all sizes. You can follow the Pumpkin Festival Facebook Page here.

8 Lessons I Learned from Our School Fete

How to Make Your Volunteers Stand Out in a Crowd