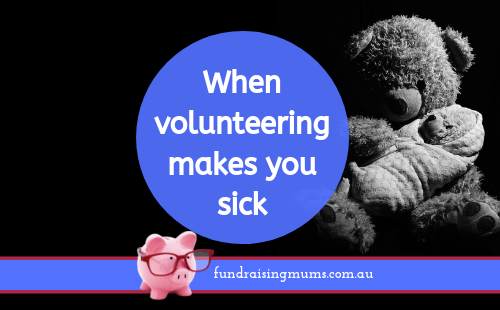 I know I’m not normal. Normal people don’t spend most of their week researching and writing about fundraising. Even normal P&C/PTO members don’t live and breathe fundraising all the time. People who put their hands up to organise a school fete, or take on leadership roles in the P&C are not normal either. They’re extraordinary and we should be grateful for every one of them.

But there is a fatal chicken-and-egg scenario that plays out in some schools. Hardly anyone puts their hands up to help, so the burden falls to the few who do. The community see the incredible workload (and stress) they have, and think to themselves ‘I don’t want to volunteer or else that will be me’. And so the cycle continues.

People volunteer for various reasons. They want to make a difference; they want to learn something or develop personally; they want to support a cause; they want to meet new people or feel good about themselves. Some people feel compelled (or forced), others just roll up their sleeves and get involved because they think it’s the right thing to do.

Parents volunteering for school and sporting groups tend to do it because they want to help their kids. Children make us altruistic, stupidly so – we do more for our kids, than we ever do for ourselves or other adults.

People do things which are stressful and difficult, because we know they still have positive outcomes. Look at professional athletes, training in the sun for 8 hours a day. The surgeon standing for 12 hours to do a heart transplant. When those outcomes are best for others rather than ourselves, we tend to work even harder.

The main reason why I volunteer is for my children, but there are plenty of other reasons why I do it and they might surprise you. It’s not selfish to have other reasons, but sometimes there is a tipping point at which all the good intentions and positive outcomes become outweighed by the stress, irritation and frustration that also seems to accompany volunteering at school.

Our own worst enemies

What is our reaction when we put a call out for helpers and no one steps forward? More often than not, we take the tasks on ourselves.

The problem with doing this, is that we confirm to others that their help is not needed. Whether we intend to or not, we consolidate our position as ‘super parents’ who can do everything, a position that many others think they can’t achieve, and so don’t bother trying. But none of us are super-parents. Not one of us have any more hours in our day than anyone else.

We all have kids and jobs and houses and families and commitments. I doubt anyone is trying to show off. Perhaps what we lack is the ability to say no. We don’t want to see our children missing out, so we step forward again, and everyone else breathes a sigh of relief that they didn’t have to do it.

When the numbers don’t add up

Last year I was involved in organising a large community fete, with probably 8 months planning in the lead-up to the event.

People have their own reasons for taking on the heavy lifting of a fete, for volunteering countless hours over many months; and when you spend a lot of time with people like that, you sometimes begin to judge the efforts of others – the ‘normal’ people beyond the circle of crazy-fete-freaks – against these abnormally high standards. That’s kind of like comparing a dolphin’s ability to fly against a pelican, simply because it can jump out of the water every now and then.

There were days when I raged at the seemingly negligible contributions of 90% of the school community. I got angry, frustrated and disappointed that so many chose to leave the work to the few.

I resented the time I was missing with my family, the time I could have been working or writing, (or sleeping) when instead I was sewing and planning and creating and attending meetings and baking and pleading and documenting and researching and networking and designing and sorting and basically going crazy with stress.

And then I would take a breath, and tell myself that I chose to do this, that I could step back anytime. People would contribute in their own ways and it was not for me to judge them against my own unrealistic level of work, which was my own free choice.

It was also hard to blame them for their decision to stay away, when I could see for myself the negative effect volunteering was having on my own state of mind.

For better or worse

I recently shared a post from Vice called ‘Volunteering is the best kept secret for mental health’ and in it the author argues that there are both mental and physical health benefits from volunteering and helping others.

I shouldn’t have been surprised at the response to the post. The overwhelming reaction by readers to the article was disbelief, followed with statements about stress – not mental health benefits – being the most common response to volunteering at schools. My own recent experience organising an event with only two others led to many sleepless nights and all three of us succumbing to head colds, lost voices and flu as we pushed ourselves too far. I myself, with my snotty nose and raspy voice was hardly a poster child for the positive benefits of volunteering.

One of the emails I received from a reader showed the exasperation that comes from managing other parents, to the stage where her breaking point has been reached:

“It is so frustrating to deal with people who are so inconsiderate and leave [things] to the last minute…  We constant worry about reaching minimum order requirements, or meeting minimum attendance numbers…  It doesn’t seem to matter what I say or how hard I try, some people just don’t make it a priority.  They seem blissfully unaware of how much stress and pressure it puts on us as organisers.”

But what is the solution?

Does it rest with individuals, and it is up to us to limit the number of times we say ‘yes’ and manage our own mental health?

Or does it rest with committees? Should we protect our volunteers, and let an event or fundraiser fall by the wayside because no one (else) puts their hand up to volunteer? The kids don’t get a disco? Is this the worst thing that could happen? Are we giving them too much anyway?

Or do we just keep pushing forward, because that’s what we do.

Have you ever reached the breaking point? What did you do next?

So, Volunteering Doesn’t Make the World a Better Place?

How to Get the Hard Core Non-helpers Involved
« Facebook Fundraising: A guide for schools and individuals
99 Things to Make and Sell at Fetes or Markets »