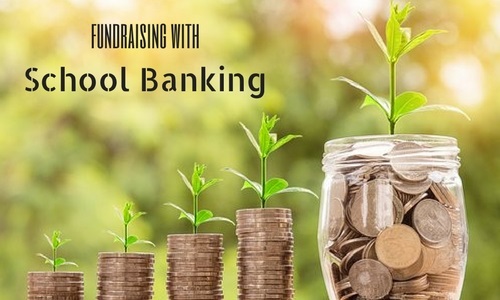 I remember fronting up to school every Thursday as a kid with my one and two dollar notes and coins. We would line up at a table hastily pulled from the staff room as a volunteer Mum or Dad took our money and made a little stamp and squiggle in our bank book. If I remember correctly (and it’s been a few years) on the cover there was a picture of a bum wearing jeans.

In 2016, according to Canstar, there were eight banks offering school banking programs in Australia. While most of them are small local credit unions, the leader of the pack is definitely the Commonwealth Bank’s Dollarmite program, which has been running for more than eight decades and reaches all corners of the country with over 3,800 schools participating and representing almost a third of a million Australian school students.

This is contrasted with the other major banks: ANZ and NAB do not offer any school banking and Westpac provides some packages but do not take any commissions or payments.

CommBank Dollarmite Program – how much can you earn?

The fundraising basis of school banking is that the bank pays the school for each new account opened, and pays a percentage commission on each deposit made.

For Dollarmite accounts, Commbank pays the school $5 for each new account and 5% of the value of each deposit, up to a value of $10.

To put this into context, if a school of 200 encouraged 30 new students to open an account every year, and each student deposited just $5 every school week, the annual commission would be around $2,150.

In reality though, the average earned by schools was closer to $600, with a total of $2.3million being paid to schools from Commbank in 2015/16.

In addition to the fundraising component, Dollarmites also offers an online education website with money games for kids and lesson plans for teachers, and offers a variety of workshops for primary school students and a separate program for high school. Others banks, including award winner Hume bank also offer a range of programs and workshops covering a range of topics from banking to superannuation, and from setting goals to managing debt.

What is involved in school banking?

Not much has changed since I used to do school banking in the 1980s, with kids setting up a savings account and receiving their own passbook, and then making a weekly deposit on banking day. These days however, you can now make deposits electronically as well as cash in an envelope.

Some banks may offer staff to help set up accounts, but in most cases a school staff member or parent will need to volunteer each school banking day to oversee the deposits.

Children usually bring their passbooks to school each week on School Banking Day and deliver into a box. These are processed overnight by a volunteer and the books returned the following day.

The Dollarmites Program allows children to earn a token for each deposit, irrespective of value, with ten tokens being needed to redeem a reward. This encourages students to make a deposit every week of term, with the rewards including items such as keyrings, pencils cases, earphone and handballs.

An article published in the Sydney Morning Herald this year, stated that Choice – Australia’s largest consumer group – had called for a ban on CommBank’s school banking scheme, saying it gave the bank ‘unfettered access’ to children and that the payments offered to school were essentially kickbacks.

Two years earlier, Senator Sam Dastyari raised similar concerns during an inquiry into credit card interest rates, calling on the banks to actually release what information they collected about children and whether they were effectively grooming them to be future customers. Scott Pape, better known as the Barefoot Investor, was quoted as saying that allowing banks to teach financial literacy was “the equivalent of having Ronald McDonald teaching kids about nutrition”.

The main argument against the banks paying schools to encourage children to set up bank accounts, is that when the children are older, banks have all their details and can begin offering personal loans and credit cards. The phrase used by Choice’s Tom Godfrey was ‘toxic’, but what it boils down to is that banks understand the importance of brand loyalty, and that many people will stay with a bank once they have signed up to it.

On the other hand, Canstar, Australia’s biggest financial comparison site, has awarded CommBank’s Dollarmite program the Bank of the Year award (School Banking) eight years in a row, with Commbank winning both the Junior and Youth banking awards in 2017. This was awarded in recognition of providing outstanding value products and services for children and students in Australia.

The fall-out of Choice’s charge against Commbank has seen one noticeable change. Dollarmites will say in schools, but from January 2018, the payment to schools will no longer be tied to the size of the deposit, meaning that it won’t matter if kids deposit 50 cents or fifty dollars, the school’s reward will be the same.

It’s unlikely school banking will ever be a major fundraising component, but for some schools it could be a consistent and relatively straightforward passive earner.

For any significant contribution, the school would have to actively encourage families to sign their children up to a specific bank – something many families might not consider necessary or appropriate.

However, for schools that are serviced by local credit unions that offer school banking, they might find the community aspect of being involved rewarding.

Similarly, for larger schools, the Dollarmites program could prove to be a simple and effective passive fundraiser, provided you can find a volunteer or two to dedicate an hour or so a week to process the deposits.

The incentive program for students offered by Dollarmites is no different than that offered by any number of large fundraising businesses, and like any fundraising activity, it is up to individual families to do their research and decide whether or not they want to be a part of it.

It’s Not All Just Fundraising