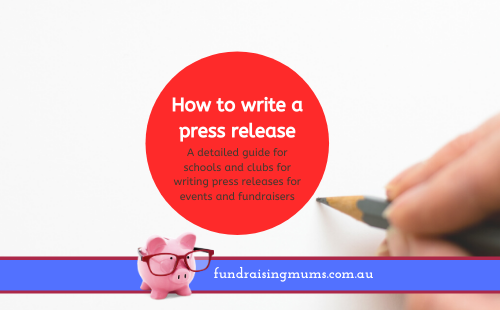 A press release is an official statement that is released to the media (such as local newspaper or radio station) to give them information about a specific matter. It has a strict format and provides journalists with information in the hope they will write an article to promote or celebrate your event.

Remember, a press release is a pitch to the media, to get them interested in your story so you need to include an angle that is newsworthy.

When would a school/club need to write a press release

What should your press release include

How to get your press released noticed

Where should you send your press release

What not to do

Other tips for a great press release

Popular Australian Survivor stars Luke Toki and Dave ‘The Golden God’ Genet will open the inaugural Ferrimont Twilight Fete at Ferrimont Primary School on Friday November 13. The reality TV stars will be on-stage as MCs throughout the three-hour event, which runs from 5 to 8pm and will be held on the school oval on Harry Street, Ferrimont.

This is the first major fete in the school’s one hundred year history and will have a sideshow alley with rides and games, a dozen market stalls, a second-hand book stall, a large international food zone with a wine bar and ongoing free entertainment from students and local bands.

There will also be a silent auction on the night with a number of unusual prizes, including dinner with either David or Luke at the local Hungry Jacks. Local community groups such as Men’s Shed and  Model Trains of WA have been invited to set up displays and there will be demonstrations by local dance and martial arts schools.

“Both David and Luke are proud West Aussies who are happy to support our inaugural Twilight Fete. All the funds raised will be used to build a ninja ropes course for students, and it is our dream that one day we see a Ferrimont ex-student win Australian Survivor.”

Ferrimont Primary School is an independent government primary school for K-6. It was established in 1918 and provides a balanced education for all children while encouraging a strong sense of community and curiosity about the world.

The Ultimate Guide to Holding a Fete – Resources Bundle

How to count people at your event