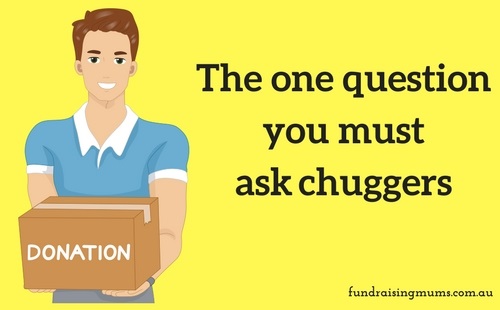 Just after Christmas, two lovely polite young people knocked on my door. I knew who they were as soon as I saw them, from the way they pushed their shoulders back as though taking a deep, stabilising breath before I appeared. They held laminated forms in from of them and wore matching shirts.

I also knew the charity they were representing. It’s a great charity – one I have supported in the past and will support again the future.

But before I could even open my mouth, the boy launched into his pitch. It was polished and chatty and he then introduced the girl – ‘it’s her first day’ he told me. ‘Be nice to her,’ he added, which I thought was a bit unnecessary.

She stepped forward and launched into her spiel. All the terrible statistics, the mounting costs, the unpredictability of it all, and the good works they are doing and wouldn’t I like to support them, and by the way, what a lovely house I have, and in such a lovely area.

That actually annoyed me, as did the other comments that followed which were clearly designed to emphasise the relative wealth of the area as if to say ‘you have money, you should be helping others.’

As they talked, not once did they stop to ask me anything about myself or my situation. Any questions they had were purely rhetorical and they clearly weren’t interested in my answers anyway. As they chatted away about breast cancer and how it affects one in four women, I was struck by how easily they could be selling their spiel to someone who actually had just been diagnosed with breast cancer. It’s not as though they stopped to take a breath to let me speak.

During this time my children had been in and out of the front door, the dog had escaped, guests had been leaving (so I didn’t actually get to say goodbye) and someone was screaming bloody murder in the house – so I finally spoke up and said ‘let’s cut to the chase.’

They glanced at each other uncertainly. I explained that I thought their charity was excellent and one I would definitely support. Then I asked who they worked for, a question they clearly weren’t anticipating. 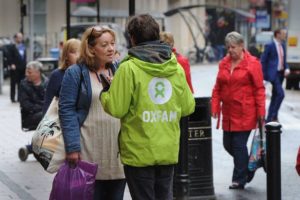 As expected, they weren’t volunteers for the charity but were employees of a marketing group, aka chuggers or charity muggers I then asked them what proportion of the donation I made would go their marketing agency and what proportion would go to the charity. I had been caught out before in a shopping centre once, agreeing to sign up to a monthly donation for another excellent charity, only to get home and see the fine print – the equivalent of 93% of the first 12 months of donations would go to the marketing agency.

This seems to be standard for most of the charity sign-ups you encounter in shopping centres or who knock on your front door. Knowing this, I asked the young man to show me the fine print about exactly how much of my monthly donation would go to the charity. On his well-used iPad, he scrolled to a screen that showed a page saying that 16% of money raised through donations would go to a fundraising fund. This he explained, was the pool of money from which he and his fellow door-to-door workers were paid.

16% didn’t sound too bad to me. I appreciate that all businesses have costs. Even the most well-intentioned charity group in the world have to pay for phones and photocopying and hosting and all the other things that make us function. It’s unrealistic and naïve to expect that 100% of every dollar we donate goes directly to the people the charity is supporting.

I then explained that what I now did, rather than sign up for a monthly pledge, I would prefer to make a one-off donation directly to the charity. He quickly added that 16% of my donation would also go to the fundraising fund, but even if I decided to donate the equivalent of a two year $20 pledge (ie $480) it would still mean $403 going to the charity, rather than $260.

The screen he had shown me didn’t actually look like a ‘fine print’ screen – the headings were much too big and still had a salesy feel. So when I questioned him again, he found yet another screen on the iPad, and there in tiny font, was the number I was searching for: 93%.

While 16% may have been the average percentage of all donations that was used for fundraising costs (ie marketing), this included the unsolicited donations, the tin rattlers, the bequests, the cake sales, school donations and every other donation that came to the charity via volunteers and members of the public.

But if I was to sign up today, handing over my credit card details to these charming young people, assuming I stayed on board for a few years, almost a full year of my donations would go straight to the marketing agency, and not a cent to the charity. It would take approximately 28 months of donations before the charity saw the same amount of money, than if I had made a single one off donation*.

How does the 16% figure rate compared to other charities? According to a 2012 article in the Sydney Morning Herald, some of the other major charities use as little as 5% of their donations on fundraising costs, all the way up to 40%.

I should also point out, that the chuggers who accost you in shopping centres and knock on your door are not the recipients of the 93%, or anywhere near that. In fact, there is a major class action taking place by thousands of these workers against a major marketing company who claim they have been paid as little as a few dollars an hour for their work collecting donors for Australia’s major charities. Read more here.

The point I wish to make is that you should be informed about where your money goes. Don’t stop making donations to the charities you want to support – but take a little bit of time to find out the best way of getting that money to them. Australians are in fact an incredibly generous country, last year donating over $12.5 billion dollars to charity. That’s pretty impressive considering there are only 24 million of us. But if you want to maximise the amount of your hard-earned dollars that make it to the people who need it most, make sure you are informed where it is actually going.

Read this story from Mamamia from an ex-chugger who talks about free travel, incentive gifts, drinking and a rather dubious grace.

Different Viewpoint – Small Businesses: What Is It Like to Be Asked for Donations