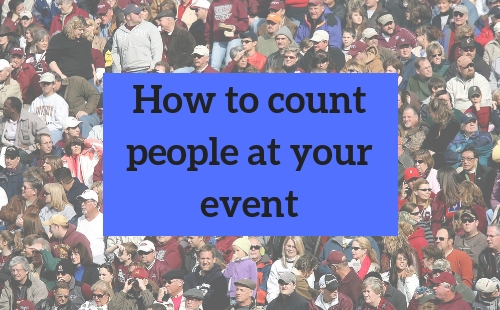 It’s the million dollar question – how many people should you expect at your school fete? How many sausages do we need to cook? How many lucky dip bags do we need?

Sometimes only hindsight is the best way of predicting the answer to that question, but even predicting how many people attended your fete after the fact is just as difficult.

Unless you expect visitors to register or purchase tickets for your fete, it’s extremely difficult to know exactly how many attendees you had. This is made even more complicated by various factors:

It’s often difficult to tell how long people stay at an event like a Fete. One family might stay for the entire six hour event while another family might only stay for an hour. Yet, they could still spend the same amount of money. Moreover, it’s entirely possible that the family who stays all day is counted multiple times if some of the following methods are used, while the family who only drops by for an hour isn’t amounted at all.

If your event is located in an area where people must drive to access it, your job is made easier as you can count cars instead (especially when you are asking for a gold coin donation to park), but in the case of most school events, many people will be parking in local streets or walking from home.

Ultimately, no method of counting is entirely accurate, and there are pros and cons to each as discussed below. The best advice is to choose one method and stick with it, keeping in mind that all methods tend to underestimate numbers. These are all very general ways to make an approximate count.

Have people manning all the major entry points and get them to do a headcount as people arrive. You can get little handheld counters for this purpose that cost around $13. Each person would need one, and they can easily be passed from person to person if you are having people man the gates in shifts.

This depends on having people physically located at each entry/exit point for the entire event, with the exclusive task of counting people (since it is difficult to sell raffle tickets, hand out programs or collect donations at the same time as counting and clicking). Therefore it may not be the best use of your volunteer resources. This method works best when there are very defined entry and exit points but done carefully, you can have a very precise count of visitors.

If you are after something more approximate, and plan on handing out programs as people enter your event, you can use a count-back method. If you have a defined number of programs (say 200) and you know you are giving out one program for every 2 or 3 people who arrive (ie 1 per family) and after 2 hours you have handed out all your flyers, you can guesstimate you had between 400-600 people arrive in that two hour period.

This depends on making sure that each arrival receives a program, and is best if there is something of value in the program that makes people want to take one (a map, schedule of events, check-list of activities etc). You will need to adjust your calculations based on your own community – some families/groups will be small (on average 2 or 3 people), in other areas, a family will average 4 or 5 people.

If you have a central point selling wrist bands for rides, you can extrapolate from the number of bands sold at the event. If you assume that for every child who bought a wrist band, there was another child who didn’t get a wrist band plus at least one parent each and another adult without kids, you could guesstimate that if you sold 150 wrist bands, there might have been 5×150 = 750 visitors at your event.

You will know the demographics of your area better, and might determine that 75% of kids would have a wrist band, or that each kid would have two parents and a grandparent tagging along. This works best for events where there is a strong child-focus, and it’s safe to assume that most people at your event are part of a family.

Wait until they stop

Try and count people when they are still. For example if you have a special performance or event that is a major drawcard of your event (carols by candlelight, a fashion parade or a band playing) this is a good time to count the crowd while they are still. You can make a guesstimate that perhaps 30% or 50% of the attendees at that point are watching the show, while the rest are still mingling around. However, this is only a point-in-time estimate, and doesn’t take into account people who left before the show, or arrived afterwards.

Designate 10+ volunteers who are located at different areas around the event and get them to do a rough headcount in a pre-determined zone at defined times. For example, you might have someone do a headcount of all the kids and people in and around the games area, someone might count the people sitting in the area listening to entertainment, someone will be counting those queued for food and so on. Get them to do a count at two or three intervals during the event, and be very specific about what time they do a count, even if you send a text message to them all and say ‘next count starts in 5 minutes’. Make sure they write it down so you can look at the numbers later.

If you have access to a drone (and are allowed to use it) why not fly it over, take some photos and make some guesstimates of the crowd. Alternatively, if you have certain vantage points, take large crowd photos every hour from the same position(s) with your mobile phone and later on you can do a rough headcount by enlarging the pictures and counting bodies. Keep in mind that while it is not illegal to take photos of people in a public space, there may be some concerns over photographing people, and this method won’t work if there are lots of spaces undercover or indoor (ie in classrooms or under large tents) where drones can’t access.

What does the research say?

Obviously the number of people at your fete will depend heavily on the number of students you have at your school. According to the National Fete Research Project*, small schools with less than 300 students, on average managed to attract around 500 people to their event (technically less than half of the small schools surveyed attracted more than 500 people).

For large schools with more than 700 students, around half of the events attracted more than 2,000 visitors.

How do you count the people who attend your fete? 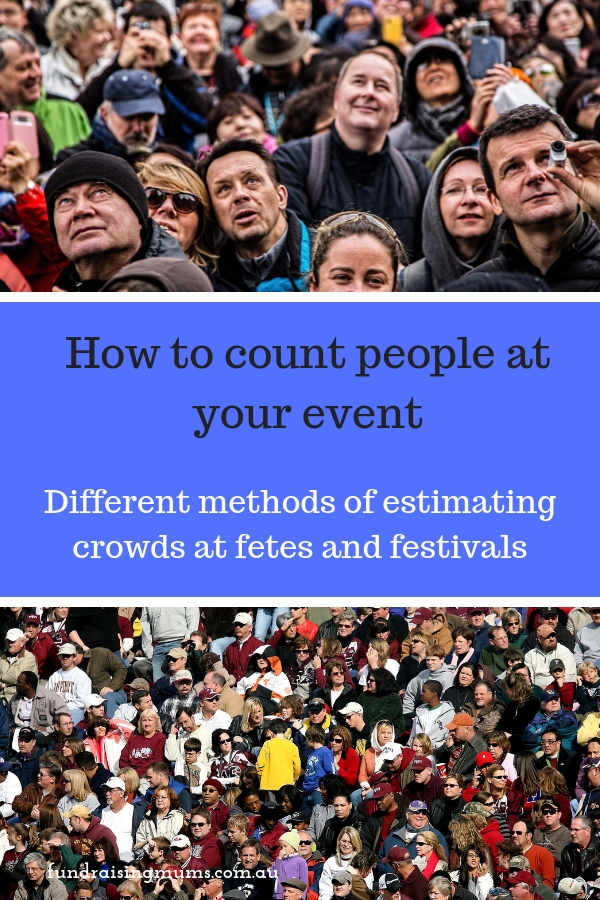 Should you use a mobile ATM at your event?