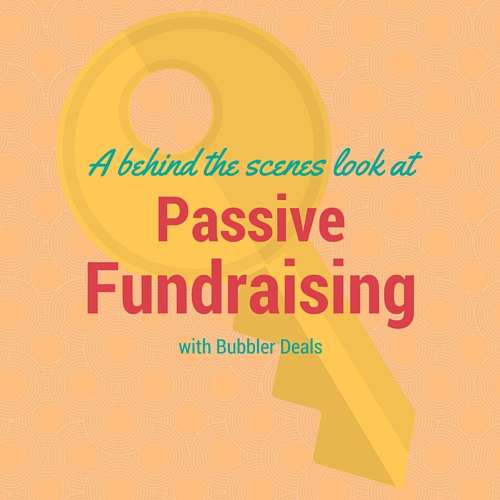 In one respect, Bubbler Deals is like many online discount and coupon sites, offering bulk discounts and value packed coupons to customers. In other respects Bubbler Deals stands alone – firstly because of its focus on families and children under 12, but primarily because it has a fundraising component, delivering thousands of dollars in donations to schools and playgroups across Australia.

Bubbler as a passive fundraiser

From a school fundraising perspective – it is as simple as registering your primary school or kindy as a nominated beneficiary and then promoting within your school. Schools and kindys located in QLD, NSW or the ACT Bubbler may require a written authorisation form to be signed before adding to the list.

Once families sign up, the majority of the work is done – they receive deals via one email every week (also a good thing to mention – they won’t have their inbox choked up with daily emails) and when families choose to purchase a deal, the 5% donation is automatically paid.

For example, when I purchased four tickets to a local production of Peter Pan. They should have cost $79.80, but I paid only $30 and a $1.50 donation was automatically made to my local primary school.

As with all passive fundraisers, it is important to regularly remind current families that they exist, as well as promoting to new families. Ways of promoting passive fundraisers include links on the school/P&C website, mentions in the weekly newsletter or posters on a community board

Letters are sent to the school P&C Committee when a donation is to be paid.

How Bubbler was started

In 2012, Katrina McCarter was a mother of three children at Wembley Primary School in Western Australia, lamenting the amount of effort that went into fundraising for sometimes minimal financial gains, when she decided that she would put her money where her mouth was, and try something new.

The result was Bubbler Deals.

The 5% Donation Program was set up by Katrina so that schools could have a simple, background fundraising option that – once set up – could potentially provide hundreds of dollars with very little effort on the part of the school P&C. It proved so successful, there are now hundreds of beneficiaries across Australia – with the most recent payout (funds are automatically paid twice a year, once the value reaches $50) delivering cash deposits varying from $50 to more than $1,200 into the P&C accounts of almost fifty beneficiaries.

‘It’s very rare for people not to make a donation,’ says Katrina. When customers first sign up to Bubbler Deals (a weekly email with all the current deals) they can nominate which beneficiary they wish their donation to go to, and Bubbler remembers this for subsequent visits. You can easily change beneficiaries if you want your donation to go to more than one, or choose the default of Playgroup WA.

Playgroup WA is one of the biggest beneficiaries, and in late 2015 they compiled the $11,000 worth of donations to invest in craft packs which were then delivered to every single Playgroup session across Western Australia. As Katrina says ‘Playgroups were encouraged to use their creativity with the kids to create something. It was great to see the donations used to encourage imagination and creativity in kids.’

Such was their success, in 2012 Bubbler won an AusMumpreneur Award for best customer service, in 2013 Bubbler Deals was a finalist in the DFK Smart Start Up Award, and by 2015, Bubbler had expanded beyond Perth and went national.

The deals are varied across states and cover everything that might be of interest to families and parents such as movie and theatre tickets, costumes and dress ups, baby products, heavy discounts on products plus special packages just for mum and dad such as massages and high tea. Families can save between 40-80% on all products and postage is typically included.

In short, they are all highly relevant to families and there is a good mix of offers meaning that most families will be able to find something they are interested in: and as Katrina says ‘it’s easier than a cake stall.’

Katrina sold the business in 2016 but Bubbler is an award-winning website that continues to offer deals and fundraising dollars to Aussie schools and playgroups.

For more information, visit the Bubbler website at: http://www.bubbler.com.au/