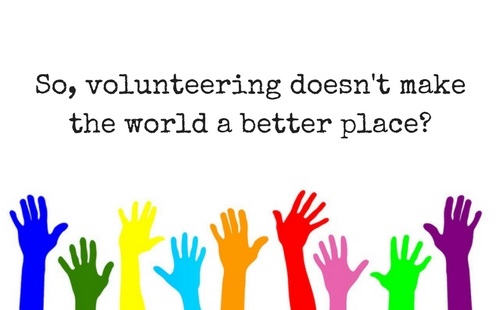 I read Catherine Walsh’s piece entitled ‘Volunteering Doesn’t Make the World a Better Place’ while I was standing in the middle of the kitchen early in the new year. I was meant to be cooking dinner, but I was so stunned at what I was reading I had to turn the stove off and keep reading.

Like my dinner, I have now been simmering over it for a number of weeks, and read a number of responses to the original article. Admittedly, it’s hard not to take personal offence at the article. Although Catherine is directing her vitriol at flawed government priorities and spending, claiming that we would all be better off if everyone stopped volunteering, strikes at the very heart of what I do, what my friends do, and what all my readers do.

The claim that Catherine makes is that unpaid volunteers are propping up a broken system thus enabling the government to continue to short-change essential services. Her argument seems to be that if volunteers stopped buttressing the flawed systems, the government would have no choice but to step in and fix the problem. This is fine in theory. So is communism. Unfortunately, somewhere between the theory and real life, these grand ideas get corrupted or watered down, and if we wait for government to find the money to fix these problems, how many people are going to suffer in the meantime?

Considering Catherine has been a volunteer herself, I find it difficult to accept that she is actually suggesting that we literally stop serving food to the elderly, stop planting trees or stop coaching our kids. Because these are all voluntary roles. So is running the uniform shop at the local school, researching Australia’s war dead, rattling a tin for Legacy and working the phone room at Telethon.

Catherine claims that the most valuable volunteer work is done ‘upstream’ – where the outcome of this charitable work is to change policies, improve funding systems or prevent the problems in the first place. I wonder how many of the six million Australian volunteers actually work ‘upstream’ and how many are just average citizens just doing their part? Moreover, exactly how many people who work ‘upstream’ and have the power and opportunity to change policy and influence funding models, are there in a voluntary capacity, and how many are actually high-earning politicians, business people and influencers?

Catherine argues that because volunteers are not paid, they are not valued, but I feel that not all the work done by volunteers can (or should) be commodified. If you follow the argument that the gaps currently filled by volunteers should instead be filled by paid workers – surely this means a hit to the hip pocket for everyone, as tax-payers will eventually be footing some of the bill. Similarly Catherine’s argument that chuggers (charity muggers) are really just the new face of government services being outsourced to church-run charities, overlooks the fact that these cheerily relentless ‘volunteers’ are actually paid employees who work for a monolith middle-man taking a massive cut of all donations.

In reality, volunteering options are much broader than what the author suggests, and not all the myriad volunteer roles in Australia today could be seen as propping up broken systems or filling gaps left by insufficient government funding. I can only hope that the cringe-worthy title was an editorial decision designed to gather more clicks, rather than an across-the-board condemnation on the value of anyone and everyone who volunteers.

Tell me these things don’t make the world a better place?

When Volunteering Makes You Sick