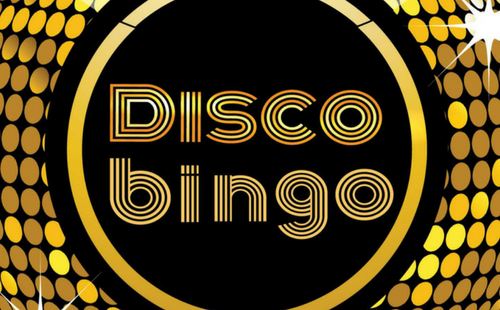 Dolly’s Disco Bingo is the original music bingo company in Australia, where instead of numbers, well known tunes from all eras are played, and marked off on custom bingo cards. It is fun and sassy alternative to traditional trivia fundraising nights.

Fundraising idea in a nutshell: bingo night using music instead of balls/numbers

Profit: variable, depends on how much you charge

There are a handful of tried and tested fundraising events for large crowds – mainly quiz nights and bingo and their myriad variations. They are great profit earners, are suitable all year round and can cater for large crowds. Disco Bingo is a fun new alternative to these traditional fundraising nights, and can be suitable for all-ages groups. 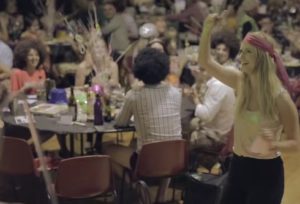 What is Disco Bingo?

Everyone knows traditional bingo where numbered balls are drawn out of a cage, and players mark off the number on their ticket. With Disco Bingo, 30 second grabs from well-known tunes are played instead, which is plenty of time to jump up and have a bit of a dance.

Rounds go for approximately 20 minutes each with 40 fun songs in each round, covering all eras of music – plus you can have special disco rounds with tunes from the 70’s and 80’s or kids/teen rounds with Top 40 songs. Each unique bingo ticket has 15 songs, with the winner of each round shouting BINGO (or actually shouting anything they want if they’re in flares and a big wig).

There are two options to have a Disco Bingo night. If you live in Melbourne, Sydney or Tasmania you can opt for a fully-hosted event, which means the minimum amount of work for you with the maximum amount of fun.

A hosted show includes all the DJ equipment, disco lights, the host, tickets and dabbers and goes for 4 hours which includes 3 rounds of disco bingo, music games, dance offs, best dressed competition (if applicable) , and help with all fundraising games and auctions if required.

If you wish to combine the disco bingo with traditional trivia, you can choose a four hour event with two rounds of trivia (supplied), name that tune, team dance off and disco bingo to finish.

The price is between $600 and $800 depending on how many guests you have, and there are cheaper options for lunchtime functions.

If you’re on a budget, or located anywhere else in Australia, there is a DIY option where you purchase the unique bingo cards which includes music and instructions (NB music can be sent via computer link or on a USB stick.)

You would need to provide an appropriate sound/DJ system, an energetic host, prizes and dabbers (pens). Prices are based on how many rounds and how many people, and includes postage. 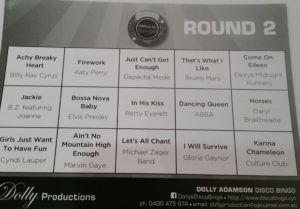 How to raise money with Disco Bingo

While you could just host a disco bingo night as a fun night out for your school or club, it makes an easy fundraiser – simply by adding a generous profit to your ticket price, as well as selling food and drinks, running an auction or raffle or playing other games.

Comments from schools and clubs who have already held a disco bingo night include:

‘The buzz around school is great this week after everyone enjoyed your Disco Bingo night.’

‘It never gets boring – just more fun each time.’

‘You make it very easy for us.’

‘You provide non-stop entertainment and hilarity and the feedback from the guests was extremely positive!’

Clare from Templestowe Heights Primary, who has been to four of Dolly’s Disco Bingo events says you can never get bored of disco, and found that by offering a cash prize to the best-dressed table of players – ‘theme your team’ – helped everyone get in the mood, because everyone has more fun when they really get in the spirit of the night. She also felt ‘bingo is a great change from trivia as some people are afraid they don’t know enough for trivia.’ One last piece of advice she offers is to emphasis on posters that it is a bingo night – some people might think it is just a disco and while for some this may send them running to the local vintage store, others might just run for the hills. 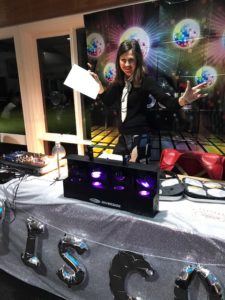 To find out more visit the Disco Bingo website here or email Dolly at dollyproduction@optusnet.com.au

Related articles to help you even more: