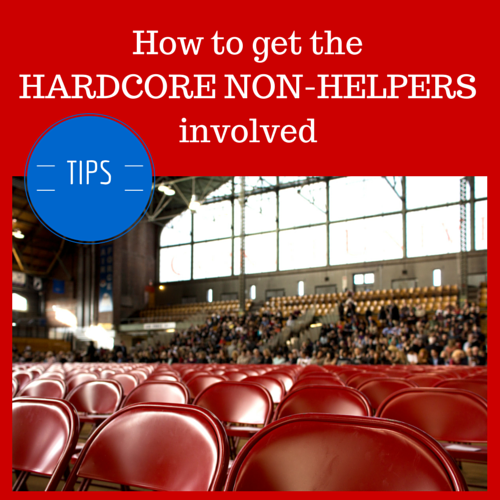 Every school has them: the parents who can’t – or won’t – help with school fundraising. Many will have perfectly reasonable reasons why they can’t (or don’t want to) help. Others might just be a bit intimidated or unsure about what is involved. Here are some practical suggestions how to approach these non-helpers, and get them involved.

Limit the number of fundraisers the school does each year – people are more likely to get involved in one or two big events rather than a dozen smaller events and sales throughout the year. (Keep in mind most parents will be asked to participate in fundraising from other groups such as sports groups, churches etc).

People are more likely to commit to a small, well-defined role than an ambiguous ‘volunteer’ position. Let them know signing up for one event doesn’t mean they will be expected to volunteer for every event for their rest of their lives.

Focus on community events as well as fundraisers. For every ‘fundraiser’ have a free or at-cost event for all families – such as sun-set picnics, carols by candlelight, camping nights or movie nights.

Get kids to enlist their parents.

Tie events to a specific goal that is relevant to them – parents with older kids won’t care as much about raising money to buy new sandpit toys for the pre-school, but they might be willing to help at a disco if the money is going towards Year 6 camp.

Reach out to new families as soon as they enter the school – welcome them to events as a VIP and let them see the community spirit. Make volunteering seem like a natural (not expected) thing to do.

Allow people to form a group with their friends to work on a discrete aspect of the project – particularly for minority groups within the school who may feel out of place. Encouraging different groups helps bring the school community together, and people are more likely to sign up if they already know someone else (ie a friend) who has volunteered.

Ask the school community for new ideas for fundraising events – not only how to raise money, but what to raise the money for.

Make it worth their while

Rather than ask for people’s time, ask for their skills –perhaps a parent is an accountant or designer etc.

Provide incentives to volunteers (use a donated prize such as bottle of wine or dinner voucher to raffle off to all the volunteers/helpers).

Let families see the school (ie principals and teachers) praise their volunteers and P&C – make it clear that their contribution is appreciated and publicised and it’s not all behind closed doors.

Have clear, easy to follow guides for all the major fundraisers – don’t expect people to make stuff up as they go along. Have a guide they can follow. The easier it is, the greater number of people who will volunteer, and once people have done a particular job once, it is more likely they will put their hands up in the future.

Approach parents in multiple ways – newsletter, posters, via class representatives, via teachers, at assembly, in person at pick-up/drop-off. Some people don’t volunteer simply because they were never asked or never knew about the event.

Allow people to donate a sum of cash in lieu of donating goods or time at an event/fete.

What are your top tips for getting people involved at your school or club?

How to prevent fundraising boredom

13 Ways to get More Parent Volunteers