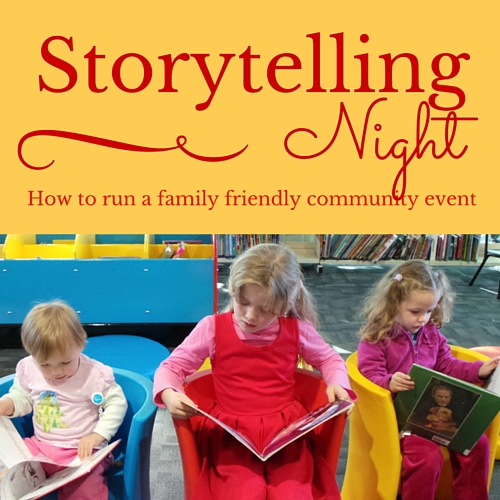 Practically anything can be turned into a fundraiser. Similarly, a school community event can easily raise money, even if that is not the primary goal. Holding a story telling evening is a wonderful way to involve the whole family (and raise a few dollars at the same time).

When the idea of a storytelling night was raised at our school earlier this year, I hadn’t realised there was such a thing as professional storytellers! We had hoped to hold a school event as close to Book Week as possible (August) which would involve the whole family. It was intended as a community event – not a fundraiser . We kept it as simple as possible – selling tickets in advance, BYO picnic dinner and selling glow sticks, cupcakes and hot chocolate – but still ended up raising around $1,500.

As Book Week falls in August and the weather is hardly very pleasant, we held the evening in the undercover area, which was fully enclosed.

We encouraged children (and parents) to come in their pyjamas and to bring rugs, pillows and cushions to sit on.

One of our main concerns was ensuring that the older children (Years 4-6) would be engaged, so we asked that some of the stories be a bit scary. Knowing that the final story would be about a spider, we decorated the undercover area in a spooky theme, and strung fairy lights around the room. We also had two different brochures advertising the night – information given to the older year groups was a bit more spooky and ‘grown up.’

Apart from the spider webs and fairy lights, we kept things to a minimum. Carpet squares used by the children for assembly to left out for people to sit on.

We brought in a comfy couch, floor rug and table lamp to make a story teller’s corner.

Because we would be selling cupcakes on the night, we cordoned off an area in the corner of the hall to make sure there would be space for people to queue without standing on blankets.

Just inside the entrance we set up a table where children sold glow sticks and glow headbands. These were left over from the previous year’s Christmas Carols event – where the late sunset meant they were quite ineffective. They were much more popular at this mid-winter (ie dark) event.

Our story teller told three sets of stories each lasting around 15-20 minutes. We had a break of around 15 minutes between each set. We sold cupcakes and hot chocolate during the first break, and then handed out prizes during the second break.

We opened the room up an hour before the stories started so people could come in and have their picnic dinner. We had also arranged for our canteen (Julie’s Kitchen) to provide dinners on the night, these could be ordered at the same time families bought tickets. Other options could be a sausage sizzle, international food night or ordering in pizzas.

From doors opening at 5pm, the night ran for about three hours in total. Only one hour of this was storytelling – which was more than sufficient, especially for the smallest children.

Decide if the event is to be a community event (ie be a free event, or just cover costs) or if fundraising is a primary goal. A professional storyteller is an investment – and we knew we needed to sell tickets (a minimum of 100 tickets at $5 per person) just to break even.

We sold cupcakes for $2 and hot milo with marshmallows ($1) as a way of making the event more fun and appealing to children, not necessarily as a way of making money. Everything was donated  by parents. You could also consider selling bags of popcorn or choc-tops (like the movies).

Choosing the right storyteller and getting the right stories will depend on your school. Younger children like the singing, animated style of stories where children are invited to participate, while older children might prefer some more genuinely scary or gross-out stories. You could consider a two-part evening, with different stories for the various age groups.

Space can be an issue, especially if everyone brings a picnic blanket and pile of cushions. Make sure exits are clearly marked, and don’t forget housekeeping at the beginning of the night to let families know where the toilets are located. Even in the middle of winter, an enclosed space can get hot and stuffy, so consider leaving doors/windows open.

An outdoor event would work, especially in the warmer summer months, but it would be absolutely essential to have a very good microphone and PA system. No one wants to listen to shrieking feedback for an hour.

We awarded prizes for a variety of things such as ‘best listening’, ‘best scream’ and ‘best PJs’. These prizes were predominantly new books donated by the school and parents and made into hampers for the different age groups. Our P&C also donated a couple hundred dollars of credit from a toy fundraising company  – this was money raised by school families buying toys through the catalogue, and it was nice to be able to give back to the community.

Despite how awesome glow sticks and fairy lights can look, keep in mind your storyteller probably wants to be seen as well as heard. So don’t forget the microphone and be prepared to have lights on during the night so everyone can see the actions they are performing as well as the stories they are telling.

How to Celebrate Diversity in Your School

Unique Things to do with Glow Sticks

How to Run an Outdoor Movie Night