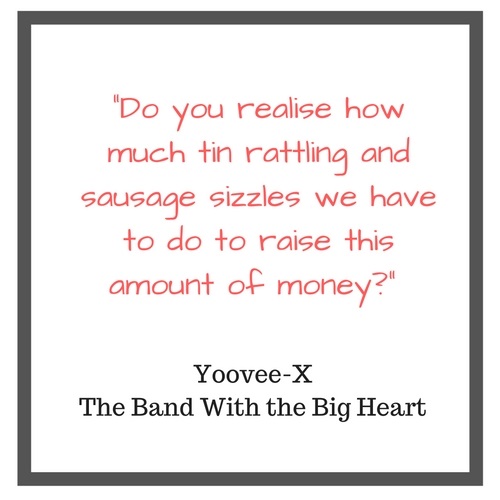 I met Paul, vocalist and drummer for Perth band Yoovee-X in the kitchen at a funeral, which is how you often meet interesting people in Perth. I overheard him telling a friend about his band and how they helped local groups and families raise money – tens of thousands of dollars – for nothing more than gratitude and a handshake. I wanted to share his story and remind everyone that there all sorts of amazing people out there, who do their part to help others in the community.

Paul Turrington’s Facebook profile shows an image of a man’s naked upper chest, a heavy silver necklace and two drumsticks against a heavy black tattoo. It is very different from the respectably suited man I met recently, who looked exactly like you would expect a senior mining specialist to look. But even though Paul has a day job as a Training Specialist at Rio Tinto, his real passion and night job, is drummer and vocalist in Perth band Yoovee-X who host events on behalf of charities and groups and helps them raise thousands of dollars.

It goes to show, you can never judge a book by its (Facebook) cover. 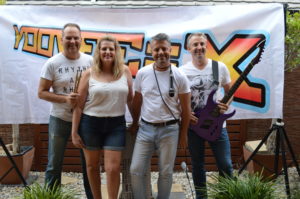 Some of the Yoovee-x band members, with Paul on the left

Can you tell us a little about yourself?

What is the name of your band and who are the members?

The Band is called Yoovee-X and the members are

We also have an amazing DJ called Steve Branson who joins us for every gig, and Chris Milford who is our all round roadie, sound mixer and lighting guy.

What type of music do you play?

We play everything from 70s disco hits (Dancing Queen, I Will Survive etc), all of the 80s classics like Duran Duran, Tears for Fears, and Pseudo Echo plus 90s Dance and even some recent songs from Pink, Coldplay and Stereophonics.

We usually play around 25-30 songs per gig, split into two sets so everyone is able to get up and have a great time. The first 80s night we played the crowd kept asking us for more and more songs, with everyone dressed up in 80s gear, it was almost like a re-creation of Live Aid! 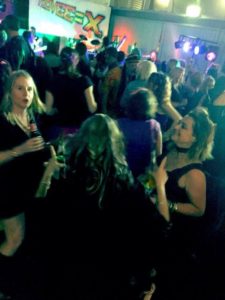 Can you tell me about how the band got started?

We started way back when in 1987 a friend put an advert in Dada records in Perth and Gareth answered it, and then introduced me to Richard. I was at WAAPA at the time so we had access to the recording studios on the weekend which was fantastic. We recorded our demo tape and sent it off to all the major labels at the time, and we received some lovely rejection letters back. We kept playing for a while but mainly as a studio band. We all had full time work and then life with marriages, children etc took precedence and although we kept in contact we unintentionally took a long break from our music. Looking back that was a good decision as it gave us a passion and the drive to do what we are doing now.

Ten years ago I suffered a severe head injury and spent 6 days in a coma. Richard provided me a Walkman and my favourite music and a few months later I started to get the urge to play drums again. We regrouped for my 40th and played to a big contingent of family and friends and we absolutely loved it. From that day on we kept practicing and playing at friends’ birthdays and other parties.

Tell me about the first fundraising event – who was it for and how much did you raise?

This is why you should never reply to Facebook posts after a few drinks on a Friday night.  It was early 2013 and we have a community Facebook page in Secret Harbour, and one of the posts had mentioned how it would be great to have an 80s themed afternoon/evening down on the local beach.

I replied, “if you want an Band for the night let us know as 80s is our speciality, LOL” and in just over an hour we had over 280 likes, people asking where the venue was and where they could buy tickets. It was crazy, I turned to Jo (my wife) and said with a blank face, “we need to organise this now.”

So this is where I started managing all our fundraising events so we chose the local Soccer club at Lark Hill as the venue. I had  also read in the local paper that the Secret Harbour Life Saving Club were trying to raise funds for a rescue boat, and after discussing it, all the band agreed that the funds raised from ticket sales would go to them.

I paid the $400 deposit for the venue out of my own money, with the hope that we might get about 30 friends there. A Surf Club member who owns a local printing business agreed to print the tickets and flyers for free, and he has now done this for every fundraising gig we have done. I also looked for a local security company and negotiated a fee based on the fact it was a fundraiser and the band were playing for free. We arranged security as we were unsure of who may be coming and we wanted to ensure the safety of everyone when they attended, and when they left the gig.

Once the tickets were printed I advertised it back on the Facebook page and sold them from the back of my car in the local shopping centre car park, with a laptop and a cash tin. I must have looked like a very shady character to all the Saturday morning shoppers.  We sold out 215 tickets in just 2 ½ weeks and another 20 on the waitlist. It was also on this night when Steve the DJ walked over and said he liked what we were doing for the community and would like to join the Yoovee-x team to donate his time and amazing DJ skills for free.

So after security and venue costs, the Soccer club made over $5000 across the bar and we were able to give a cheque to the Surf Club for just under $3100. When we handed it over to them, the man’s hand was shaking and he said “do you realise how much tin rattling and sausage sizzles we have to do to raise this amount of money? It’s like two summers worth.”

What happened after that? What led to the decision that you would do more fundraising gigs?

So from then on it just became bigger and bigger, everyone was asking when the next one would be, and who it would be for. The combination of the great feeling we get from playing music, and giving something back to our community is priceless. And in a way – unique.

It was then that we decided to play for free and for Mums and Dads. We provide a full band and DJ, raise money for a charity, hosted at a safe local sporting venue (we alternate between these to spread the monetary benefits) and they can bring their own nibbles and have cheaper drinks than the pub. 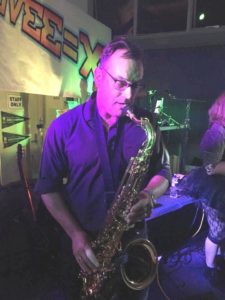 How many fundraisers have you done now and how much money have you raised for groups now?

So far we have done seven since May 2013, and including bar takings (raised for the sports club venues) and ticket sales and we have now raised over $60,000  and been able to hand this back to the local community groups, schools, P&C associations and families.

The bulk of the funds that we raise directly come from ticket sales but we have received donations from local businesses that we raffle off or have a silent auction. By us holding a gig at a selected venue we also raise bar takings for sports clubs as well, it’s a win-win situation.

In the early days we chose them and tried to give back to smaller groups, but the last two have been for young children with brain tumours and we have been contacted by a friend of their family.

The last two events have been emotional ones for us as the young girl we did the gig for in March passed away only 6 weeks after, and having met her at her house and having her thank us made it too real and close to home. The most recent one in July was for two sisters aged 9 and 12 who both have brain tumours from the LFS genetic syndrome.

Can people come and listen to you play if they are not part of the fundraiser?

Unfortunately not, as they need a ticket to enter the venue and this is where we raise our funds from. Having said that, we are getting invited to community events now so for those performances you can come and see us play for free.

Have you ever considered playing ‘for yourselves?’

Not really, we have done a few paid gigs, and have some coming up, but the overall benefit of our music and entertainment is to provide a great night out, and raise funds that can be put back into the local community. When Richard passed away in 2014 we almost gave the whole thing away, however Ryan and Gary were friends and they both offered to help if we ever played again. Their offer was invaluable and it helped with our grieving and healing process.

You have a day job as a Training Specialist at Rio Tinto  – but music is obviously a major passion – would you ever consider throwing in your job and just being a musician full time?

If I won lotto I would ! And I’d have my own studio too.  At this point in time it is good to have a steady income from my day job and be able to be a part time rock star on the weekends ( LOL ).

Describe how it feels when you hand over a cheque or wad of cash to a deserving group?

Amazing, it always makes me get emotional and tear up seeing their reactions and observing how thankful they are that you did this for them. One of the Dads hugged me and said “thank you from the bottom of my heart for what you have done for my family.” 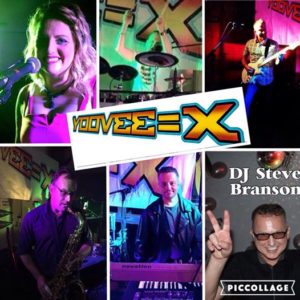 Would you change anything if you had your time over?

No, not at all. Obviously there are some things like Richard’s passing and my head injury, and the impact it had on everyone, but ultimately no.

We enjoy every time we get up on stage and we have our group huddle / hug beforehand.

For Yoovee-X, we are lucky to be able to do what we do and make so many people happy.

Yeah, I normally keep this quiet but after leaving WAAPA I couldn’t find a job so I worked at Ngala for a few months, and then at a child care centre where I was able to do music programs with children. As an 18 year old male at the time it gave me a great appreciation and respect of what some Mums go through in the early years with their kids.

What to do when you can’t sell enough tickets